First Information of the 2012/2013 European Finals in Salzburg/Austria

Pictures from the 2011 European Finals in Germany

Pictures from the EMMA European finals in Rotterdam

For the 4th time the Slovenian EMMA Finals took place on the Automotorshow Ljubljana.

After years in in Sinsheim, the EMMA kick off changed to Leipzig. 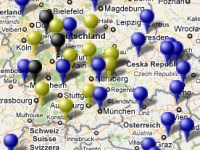 Currently there are over 90 car audio events in the calendar. I've collected them from the EMMA homepages, from EMMA Europe calendar (which is unfortunatly not complete) and other car audio organizations.

After the headjudge meeting in Fichtelberg EMMA released the Addendum 2010 with some important news.